Interview and Photography by Alessandro Casagrande 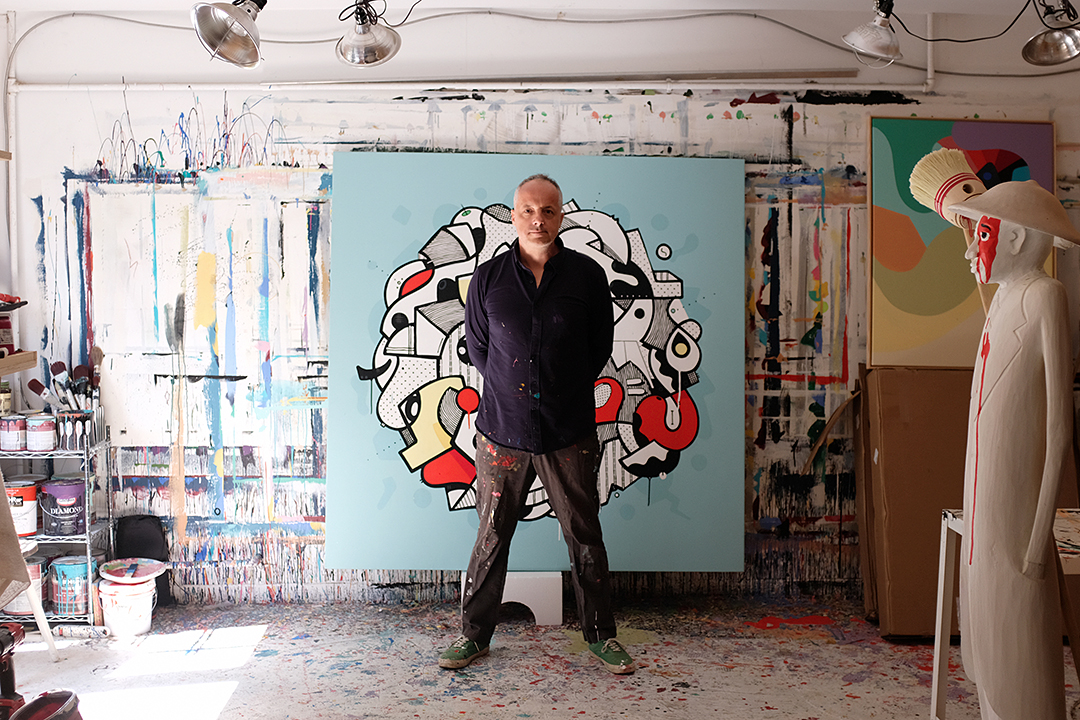 Mambo was born in Chile in 1969, from a French father and a Hungarian mother. He grew up in Latin America and started his artist career in Paris. He lives now and works in Los Angeles, California. Mambo is a polyglot artist, capable to pick what he needs on his languages palette to express his feelings in the moment. His different artworks series go from semi abstract graphic interplays of lines and spontaneous designs (Brainology series), to abstract action painting (Flavien series) as well as minimal portraits (Orange Portraits series) using his signature red & orange color, thus creating an expressive graphic universe, full of underlying meanings, combining observation, ambiguity and humor.

The core theme is humanity, the inspiration is our brain, our mental processes, sensations, emotions, memories, inner feelings and mechanical reactions. Human behaviors become colorful ideograms, our environment becomes a dictionary, where he picks symbols to write his own prose: visual enigmas, made of both intuition and maitrise.

Alessandro Casagrande (AC) – You have a profound connection with your dreams in your work. How do your dreams affect your work and how important is it for artists to dream? Can you tell us more about how the “Brainology” project began?

Mambo – In 2008, I started the Brainology series at the Centre Pompidou in Paris. We’ve created, down with my Parisian collective at the time, 9e Concept, a show called “Peinture Fraiche” (Wet Paint) which consisted of bringing our studio into the museum for three months and painting in front of a live audience. While working there, I was so excited and inspired by the opportunity, that my ideas and experiences from the previous years came together in one concept and that’s how it began. It was a graphic combination at first, very spontaneous, intuitive, all coming from my gut, applying a pretty simple process: drawing thick lines all over the canvas with a large brush and then filling in the “windows” with whatever comes to my mind and plays with the lines, with a thin brush. After a few months of doing that repetitively, I came to realize I was illustrating feelings, dreams, and emotions that I had in my mind. I realized that two factors proved it to me: I started to write my dreams in the morning or the middle of the night (I realized some motifs and patterns were actually my recurrent dreams) and my mom got a stroke that kept her mute and unable to write so I started to read books about the brain to understand what was happening to her and how to communicate. That’s when I realized my paintings were much more structured than I imagined: it came from my gut but it’s a true reflection of the brain or the mind. That’s when I chose to call it Brainology. 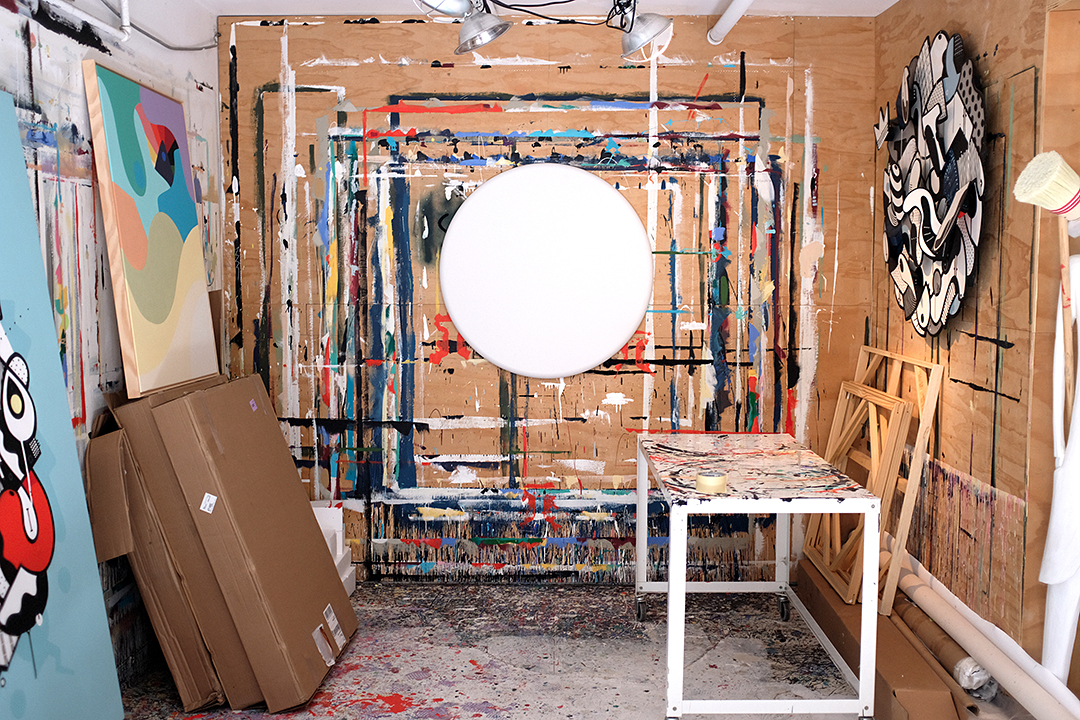 AC – The portraits you paint are with some details and the tonality of color, in particular, your use of the color red. You describe perfect feelings, emotions, and attitudes without the need to show too much but just the essential elements to feel that particular emotion. Every person has a different perspective of how society and human beings are — so what feeling captures you when you create a portrait? Is there a particular feeling or message behind this series?

Mambo – The “Humans” series comes from years of observation and traveling the world. There are looks, attitudes, silences, that are very similar around the world, despite cultural or social differences. I try to describe these feelings with infinite little variations and I guess the profound message is that despite the eras, places or gender, despite appearances or the fences to put around ourselves, what everyone needs is love. If you observe people long enough, it always comes to that. 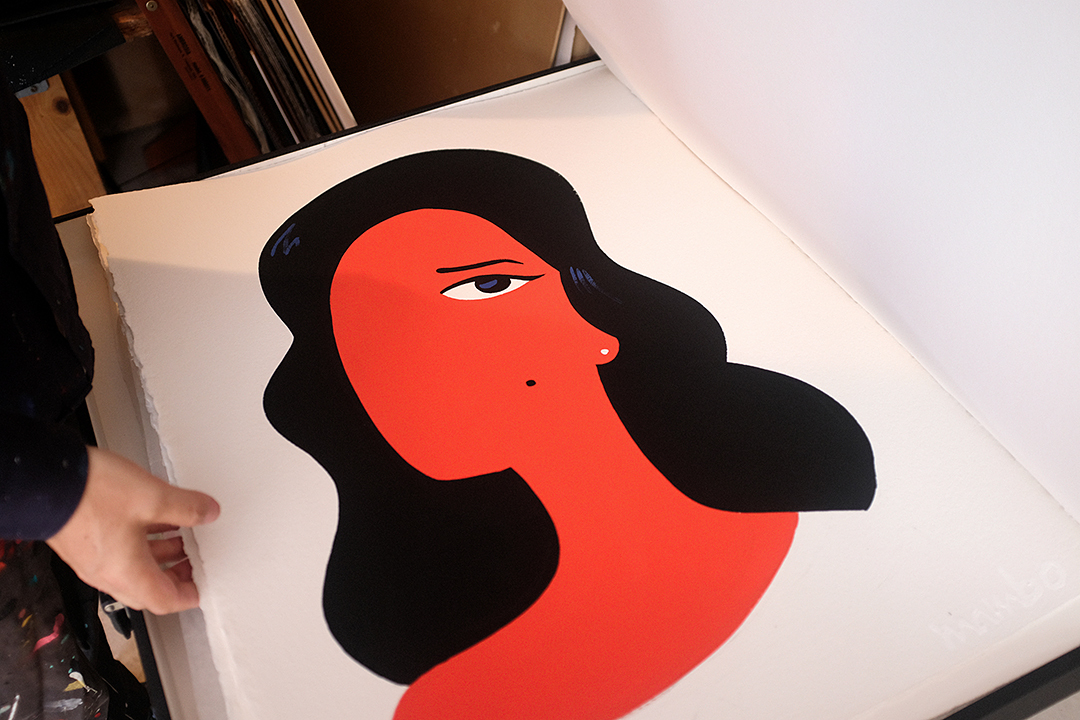 AC – You’ve done graffiti and murals all over the world and I know that you’ve worked quite a bit in Italy. Can you share a story when you were working in Italy? And how is it different to do street work in Europe compared to the US?

In 1990 and 1991, I spent several months in Milan. The first time I went I planned to stay for five days and I actually stayed for three months! I met with the people at Centro Sociale Leoncavallo and they became family to me. I lived there, had a studio to work with a bunch of other artists and collaborate, and did a lot of murals. We had a crew together with Core and Kino called Lion Horse Posse (LHP), which was doing graffiti and hip hop with a hardcore vibe. I also painted in Garigliano in a casa occupata where Casino Royale was living and playing, and we became great friends with Alioscia, the singer. I also met a really interesting artist and rapper named Fly Cat. We were both big fans of Rammelzee from New York City, whom I was lucky enough to meet and hang out with later in 1994.

I did a lot of graffiti and murals in the US at that time too: New York, New Jersey, Chicago, and even Montreal. Compared to Paris, London, and Milan, I noticed that the difference in the US is how street art is related to gangs, including, most recently in Los Angeles.

In Europe, the fight was about styles! In the US, it quickly escalates to guns. Despite that aspect, I had a chance to paint with Kaws and First Class, Daze, Lee, Claw, and Lady Pink as early as 1994. I also did a lot of murals with Dzine from Chicago.

I consider all these years of traveling and painting as my art school years. Life was my teacher and I earned an intuition degree.

AC – Working with brands is different than creating a personal project since you have to follow creative direction and merge with the brand aesthetic. I love your collaboration with Agnes B. Can you explain a bit how the relationship with a brand comes together to create a collection when you’re an artist?

Mambo – I only do this type of collaboration when it makes sense. Collaboration is not a solo show, it’s not about you, it’s a dialog. The first thing I do is listen to what the brand needs, where they want to go and then I figure out what I can bring to the discussion. My goal from there is to find the right amount of creativity I need to bring into the project, be smart and not overdo it. I don’t need brands to express myself, I do it already in my shows and on my murals, so these collaborations are opportunities for me to create variations, try new things, combine my art with new creative fields, such as fashion, music, cuisine, architecture, and animated movies.

I like building long-term relationships: we’ve been creating together with Agnes B for 20 years now, with Guts/Pura Vida for 10 years and about 30 album covers, and many years too with electronic producer Laurent Garnier and Chef Thierry Marx. I also did two collections with luxury leather goods manufacturer Moynat from Paris (LVMH) and we’re planning to do more as well as several collaborations with my favorite football team Paris Saint Germain and more to come.

I enjoy creating lasting relationships with brands because together, it allows us to increase the quality of the work over the years. 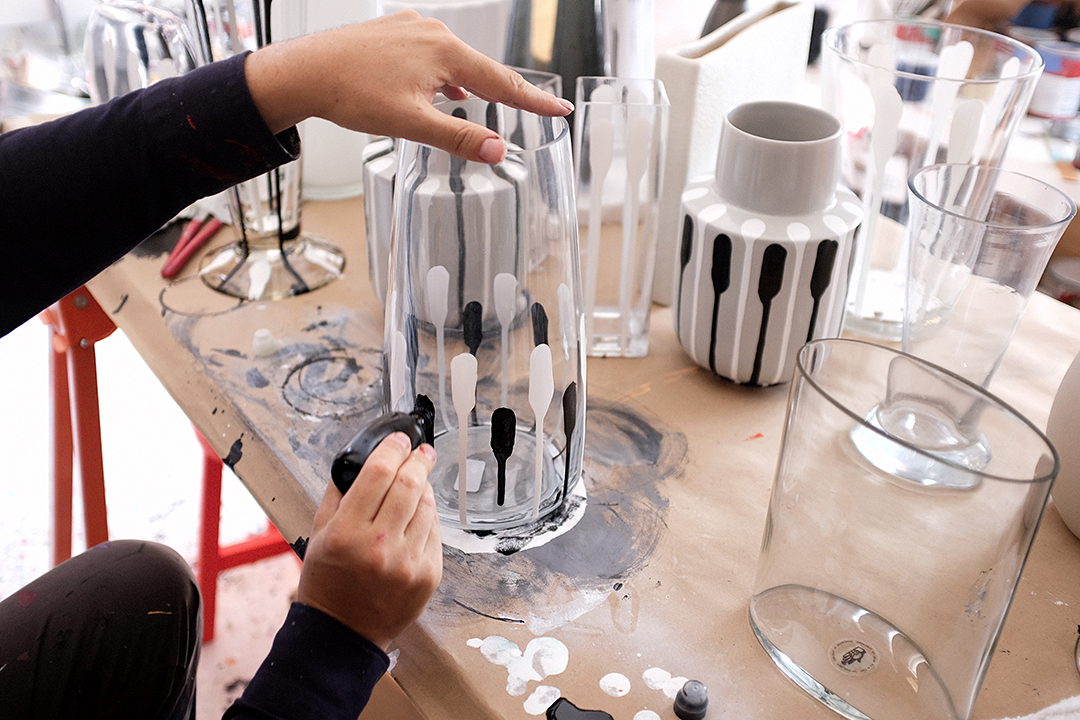 AC – The art world is challenging and so many young artists struggle to be recognized or to have economic possibilities to continue their work and make a living. As a working artist for many years, what advice would you give to young artists based on your experiences?

At this point, some young artists won’t be interested anymore as they won’t instant fame, then I’m not the right coach! But if you’re still interested, here are a few more tips. Don’t follow the trend: we all have influences, which is only good to a certain point, the real deal is finding your very personal expression form, and it has to be deeply honest. Some artists do replicas or fake stuff and succeed, but only for a short time. Time is a bitch of a judge when it comes to art. Just look at who are the best selling artists after 20, 30, 50 years…you can’t fake it.

Some artists find their personality quickly as Basquiat did, but if you don’t, it doesn’t mean you’re a bad artist. Jean Dubuffet was Basquiat’s favorite artists and mine too. He became a professional artist at the age of 52. He was a wine dealer before that. My evolution is slow too so my last piece of advice is this one: be creative and do your best on any project you do. I did a bunch of art direction before becoming a full-time fine artist. I always kept the flow going between personal and commercial work and they nourished each other. My graphic design projects sponsored my art shows and my art shows gave me better design projects until all inquiries I had were about my art. Your art is your main add until your name is. Dedicate yourself to every single thing you do, put your soul in it, be honest and you will make it. Good luck! 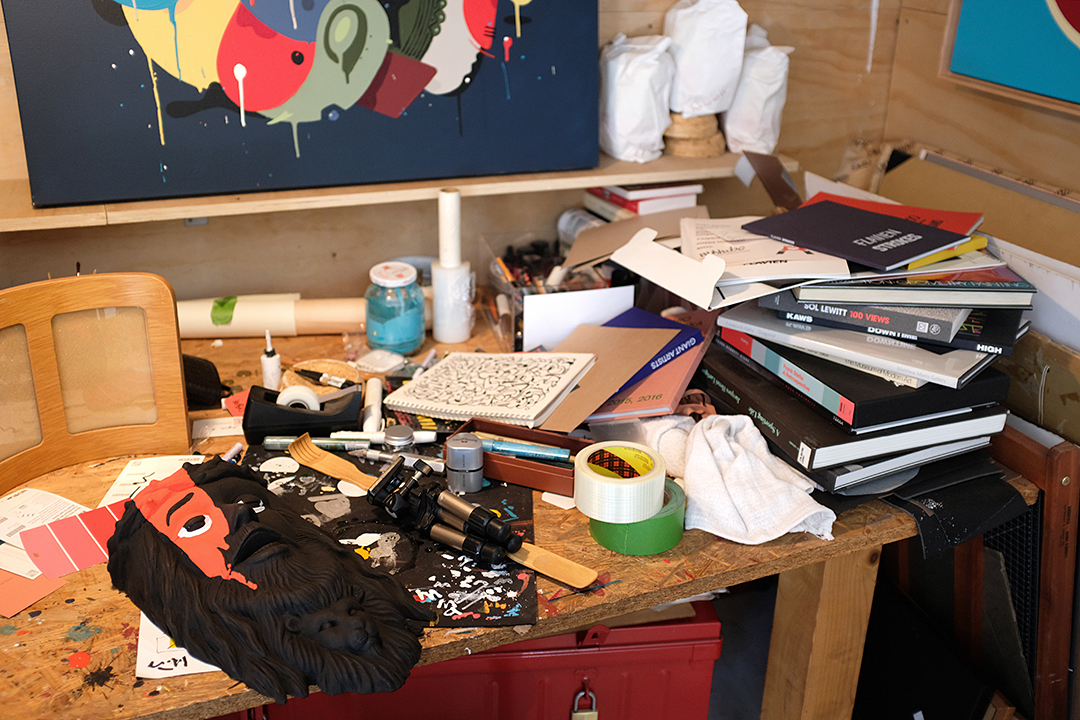